“I am not prepared for this,” I thought that day I tried waking my oldest daughter from her bunk bed. Her sleepy face peered over her pillow when she queried, “Mom, what do you think she is trying to tell me?” “Who?” I asked. She gleaned, “I’m not sure what her name is,” adding, “I think she’s a saint, she’s holding flowers. She keeps coming to me, I see her in my dreams.” I wondered if it was St. Therese the Little Flower. I paused, noting that she didn’t appear troubled but genuinely inquisitive in her request.

After several days of these occurrences, I enlisted my daughter’s godmother for help in ascertaining who she thought the saint might be. After their play date, her godmother glowed when telling me of their sacred conversation. She believed it also to be St. Therese of Lisieux. “Oh boy,” I said, “I am in trouble. Because of all the well-known saints, my daughter is beckoned by, I know this one least.” My prayer, “Lord Jesus, help!!”

Help soon came from a friend, Deacon Peter Auriema, with whom I explained how I appreciated Therese’s book, The Story of a Soul, but that I rather study saints like Theresa of Avila, Catherine of Siena, and Mother Theresa because I felt their teachings and life experience were more hardy, something I could sink my teeth into. But that of a saint that held flowers -and on occasion, the Child Jesus- didn’t connect well with me. Or so I thought! I was surprised when Deacon Auriema explained that not only was Therese of Lisieux known as The Little Flower and of the Child Jesus but also that of The Holy Face and it was her devotion to the Holy Face of Jesus that led her to merit great sanctity.  Upon learning this a fire was set ablaze inside me and I hungered to learn everything I could about this devotion. I read in Dorothy Scallan’s book The Whole World Will Love Me, just what Deacon had shared with me, that it was devotion to the Holy Face of Jesus that drove St. Therese to unparalleled heights of sanctity.

What is the Holy Face Devotion

Devotion to the Holy Face was revealed by Jesus to Sr. Marie of St. Peter (1816-1848) a Carmelite nun of Tours in France. The primary purpose of the devotion is to make reparation for sins against the first three commandments:

Denial of God, Blasphemy, and the profanation of Sundays and Holy Days

The First Commandment is that we should have belief in God and hold Him first in our hearts and lives, being imperative that we have no idols. Where we see today widespread adoration of materialism, moral relativism, and atheism, we see the removal of the Divine from society where children grow without knowing God or His Divine Love for them.

The Second Commandment broken is blasphemy, the abuse of the Holy Name of God. We see today there is so much of it we can’t go to sporting events, watch tv or movies, etc… without being subject to this violation against the Holy Name. This blasphemy also includes the fixed opposition to God, His Church, and His Church’s Teachings which leads to an intentional removal of the image and likeness of God from society through laws such as abortion.

The Third Commandment, the Profaning of the Sabbath and of Holy Days of Obligation, we have an apathy, an indifference, an a la carte or a relativistic approach, there’s an attitude which says, “It’s okay if I break this or that commandment, I can still receive Holy Eucharist. It’s fine.” To Sister Mary our Our Lord lamented, “The Jews crucified Me on Friday, but Christians crucify Me on Sunday.”

When we seek to repair we are repenting, apologizing for any unworthy communions we ourselves received or those of our loved ones, communities, or country.

A prayer of Reparation given to Sister Mary of St. Peter by Our Lord to appease His justice and draw mercy down upon us is:

Eternal Father, turn away Your angry gaze from our guilty people whose face has become unsightly in Your eyes. Look instead upon the Face of Your Beloved Son, for this is the Face of Him in Whom You are well pleased. We now offer You this Holy Face, covered with shame and disfigured by bloody bruises in reparation for the crimes of our age in order to appease your anger, justly provoked against us. Because Your divine Son, our Redeemer, has taken upon His Head all the sins of His members, that they might be spared, we now beg of You, Eternal Father, to grant us mercy. Amen.

On August 25, 1843, Sister Mary received the following communication from Our Lord:

“He opened His Heart to me, and gathering there the powers of my soul, He addressed me in these words: ‘My Name is everywhere blasphemed. Even children blaspheme,” And He made me understand that this frightful sin, more than any other, grievously wounds His Diving Heart. By blasphemy, the sinner curses Him to His Face, attacks Him openly, annuls redemption, and pronounces his own condemnation and judgment. Blasphemy is a poisoned arrow ever wounding His Divine Heart. He told me that He wishes to give me a Golden Arrow wherewith to would His Heart delightfully and heal these wounds inflicted by the sinners’ malice.”

May the most holy, most sacred, most adorable, most incomprehensible and unutterable Name of God be always praised, blessed, loved, adored and glorified, in Heaven, on earth, and under the earth, by all the creatures of God, and by the Sacred Heart of Our Lord Jesus Christ in the Most Holy Sacrament of the Altar. Amen.

By My Holy Face You Will Work Miracles

In 1849, shortly after the death of Sister Mary of St. Peter, Pope Pius IX ordered public prayers be offered in all the churches in Rome to implore God’s mercy for a revolution that was taking place against the Papal states. As a part of the prayers, the Veil of Veronica was brought out for public veneration at St. Peter’s Basilica. The image at that time had become nearly invisible with the passage of time, however on this occasion, the third and last day of veneration, the Feast of Epiphany, January 6th,1849 the image of Jesus’s Face became alive and transfigured on the Veil. The Canons of the Basilica ordered the bells  rung at the miraculous sight which attracted several thousand people who witnessed the miracle and wept openly, Jesus’s Face was in his passion, bruised and disfigured, and in profound sorrow, he was dying. Detailed copies of the effigy were made, and were touched to the relics of Veronica’s Veil, the Spear that pierced the side of Christ, and a True Relic of the Cross and sent all over the world. 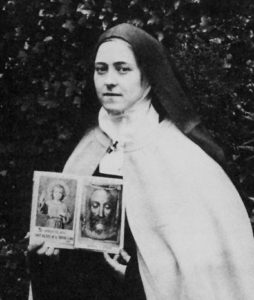 When Therese first entered the cloister of the Carmel in Lisieux she was often underestimated by her superiors who lacked insight into her unique interior life. Her Prioress commented on her young age being a reason for the lack of thoroughness in her daily duties when she noticed a cobweb in a corridor recently swept by the future saint. What she didn’t realize is that Therese took to heart these reprimands and accepted them as a holy challenge that it wasn’t enough for her to perfect her prayers and grow in holy virtue alone, but that of performing ordinary household chores with intention and excellence can lend itself to a life of heroic charity as it lightens the burden of one’s neighbor.

Now applying with the same resolute zeal she had in her quest for high moral virtues, she set herself to be heroic in her menial work, diligently focusing all the powers of her being on the tasks at hand whether it be sweeping the corridor, washing dishes or in the quiet of her cell mending, sewing or creating artwork.

Still, these hidden efforts were not taken into account by her Prioress. Feeling isolated and misunderstood in her spirituality took a minor toll on Therese until her oldest sister in religion Sister Agnes came to her aid by giving her a book about the mystical and salvific work being accomplished at a French Carmelite Order in Tours. The book: The Life of Sister Mary of St. Peter.

The depth and richness of Sister Mary’s interior life spoke volumes to Therese. She soon noticed in her recitations of the Divine Office that it was the very Face of God that the ancient Prophets sought above all else finding references on almost every page in the Psalms of David. In magnifying her focus on the holy words of the ancient Prophets with the Revelations of The Holy Face given to Sister Mary of Tours she recognized that the Face of Christ on the Veil of Veronica was the closest spiritual Image of the Blessed Trinity itself, that there was nothing loftier to seek – to live continually before the Image of the Holy Face in her interior life. This new devotion begun in her was not meant to revolutionize Church history but to make sanctity accessible to all.

A stanza from Canticle To The Holy Face written by St. Therese:

Thy Face is now my Fatherland,
The radiant sunshine of my days.
My realm of love, my sunlit land
Where all life long I sing Thy praise!
It is the lily of the vale
Whose mystic perfume, freely given
Brings comfort when I faint and fall
And makes me taste the peace of Heaven

Mother Agnes of Jesus said of Therese, “However tender was the devotion which Saint Therese had for the Child Jesus, it cannot be compared to the devotion she had for The Holy Face.”

A Remedy for Our Times

For those who are not familiar with my journey, I lost my young son in a horrifying car accident in 2000. I had a drug-induced reaction to a medication that was a major cause of the accident. Through much prayer and many “God-incidents”, I was led to fight a multi-billion dollar company to pressure them to place proper warnings on the drug. It became an unimaginable geopolitical battle which can be read via this website, -my point being, my mother’s heart witnessed unconscionable evil, much of what our country, our world, and our Church are now facing. But along the way I also encountered the Divine Hope and Joy that comes when we unite our sufferings with Our Lord for a cause greater than ourselves.

A powerful and straightforward prayer to battle against the enemies of Christ and his Church, the Chaplet of  The Holy Face by St. Mary of St. Peter can be found here:  https://theholyface.com/prayers-of-the-holy-face/

Like Sister Mary of St. Peter and St. Therese of the Holy Face, let us keep always before us the Holy Face of our Divine Savior that we might revere, adore and repair for the countless sacrileges He faces every day.

“By My Holy Face you will obtain the conversion of many sinners. Nothing that you ask in making this offering will be refused to you.”

“As in an earthly kingdom you can procure all you wish with a coin marked with the prince’s effigy, so in the Kingdom of Heaven you may obtain all you desire with the precious coin of My holy Humanity, which is My adorable countenance.”